Have you ever wondered how metal detectors work? In this article, discover how these machines find valuable coins, protect soldiers and make our airports safer (without a mathematical equation in sight).

There's something wonderful about the prospect of finding buried treasure. It has an innate appeal, which is probably the reason why metal detecting has become such a popular hobby. If you're one of the millions of people who uses metal detectors to uncover hidden coins and other potentially valuable relics, you'll know exactly what I mean!

Of course, metal detectors aren't just for fun. The technology has a variety of applications, including detecting mines in war zones and preventing people bringing dangerous objects onto planes.

Despite being around for a long time, the details of how metal detectors find metal is something of a mystery to many people. It's actually relatively simple - and it all starts with the principle of electromagnetism.

The (Quick) Basics of Electromagnetism I promised this would be a "plain English" guide to metal detectors, but it's important to understand a bit about the physics of why these machines work.

Electromagnetism sounds intimidating, but it's just the combination of electricity and magnetism.

We rely on electricity for almost every activity in our day. Whether we're surfing the net, watching TV, using a hair-dryer or cooking food, we all know how important electricity is to modern life.

What some people don't realize is that we also rely on magnetism - just in a less obvious way. To create electricity, a generator spins a drum of copper wire through a magnetic field. This generates electricity inside the wire - the magnetic field has created electricity. The relationship also works in reverse, which is how electric motors work.

To put this another way, electricity can create magnetism, and magnetism can make electricity.

Exactly how a generator works is beyond the scope of this article (here's a useful guide if you want to learn more). But the key thing to remember is that magnetism and electricity are linked. Whenever you get one, you'll also find the other.

And, if you always find two things together, it makes sense to talk about them as if they are one. Hence the name "electromagnetism."

Most importantly for this article, it also explains why metal detectors work.

How a VLF Detector Uses Electromagnetism

How does this apply to metal detectors though?

There are different types of metal detector, so they don't all work in the same way. We'll start with one of the most common detectors, known as Very Low Frequency (VLF). These types of detectors contain two coils: a transmitter coil and receiver coil.

As the name suggests, the transmitter coil "transmits" a magnetic field around the detector. This is achieved by attaching a battery that passes an alternating electric current through the coil (remember, electricity generates magnetic fields). The "operating frequency" of a modern detector is how often the direction of the current is alternated.

The great thing about magnetic fields is that they aren't affected by soil or dirt, so they pass right through. If the detector is close enough to a metal object, the constantly switching magnetic field acts on atoms within the metal, which causes the electrons to move. This effectively a creates a changing electric field, which sets up a changing magnetic field around the metal.

In other words, the act of moving a metal detector near metal causes a new magnetic field to surround the metal.

This is where the receiver coil comes in handy. As the receiver coil moves through the new magnetic field surrounding the metal, an electric current is generated in the coil. The coil is connected to a loudspeaker, resulting in a beep or click.

On a technical note, the receiver wire must be arranged so that it isn't affected by the magnetic field of the transmitter coil. Failure to do so would mean any signal from the metal would be swamped by the larger and closer transmitter coil current. If you would like to learn more about how the circuit works, there are plenty of schematics online.

A neat bonus is that the closer you are to the metal, the stronger the magnetic field and hence the larger the electric current. This is why a beep is louder when you are close to an object.

How a VLF Detects Different Types of Metal

VLF metal detectors can make an educated guess as to which metal has been detected (aluminum, gold, iron and do on). How do they achieve this though?

The ability to distinguish different metals is due to a principle called phase shifting.

Without getting too detailed, the frequency of the transmitter coil is different from that detected by the receiver coil. This is because each type of metal has a different electric resistance, which affects how easily electricity flows through it.

By knowing the resistance of each material, and hence the phase shift, the detector can tell which type of metal is below the ground. This is called discrimination in metal detecting.

As an additional benefit, many VLF detectors also allow you to filter metals you don't want to find. This is achieved by using a knob to set a certain phase shift threshold. If you want to detect a specific range, some VLF detectors will allow you to create notches (or phase shift ranges), or even multiple notches.

As you can tell just by looking at them, modern metal detectors are much more than just two coils of wire and a battery. Other important features include:

Aside from these components, most metal detectors have a headphone jack and a display panel.

Who Invented the Metal Detector?

You could argue that the origins of the metal detector date back to James Maxwell, who discovered the equations that are essential to their operation. It wasn't until the late 19th century that scientist began using these important theories to create machines for detecting metal though. The first "handheld" model was invented by a French man called Gustave Trouve in 1874, while Alexander Graham Bell invented a machine to detect a bullet lodged in President James Garfield a few years later.

It wasn't until the 1920s that the development of metal detectors began to pickup pace though. The first patent for a metal detector was awarded to Gerhard Fischer in 1925, although it was improved by a variety of inventors over the years. Lieutenant Jozef Stanislaw Kosacki, for example, refined the design into a machine that was more practical - albeit considerably heavier than modern machines. Today, the top models have features such as a computerized design and integrated circuit technology to allow the user to fine-tune their detection parameters.

Are There Different Types?

There are different types of metal detector, and one of the most important for hobby detecting is the pulse induction (PI) detector.

Unlike VLF detectors, these usually have just one coil that acts as both the transmitter and receiver. Short pulses of current are passed through the single wire, which creates a magnetic field. Once the pulse is switch of, the field collapses which causes a spike in electricity, resulting in another short-lived current.

If the detector is near a metal item, the detector's sampling circuit picks up the opposite magnetic field. It can detect the metal as the second pulse (called the reflected pulse) takes longer to fade away.

While pulse induction technology provides greater depth and decent sensitivity for gold, there are a few downsides.

Most PI detectors aren't suitable for use in urban areas, as they can't identify or ignore iron "trash." This is because they have poor discrimination compared to VLF. They are better for hunting in rural locations though, and can provide a deeper search. They are also great for beaches and other environments that contains highly conductive material.

There are also beat-frequency oscillator (BFO) metal detectors. These are the cheapest and least complex. They aren't as accurate as VLF or PI detectors, and don't provide the same amount of control.

Aside from PI, BFO and VLF detectors, there are a variety of others for different industries. Many industrial detectors, for example, have a three coil design. This configuration allows the instruments to detect tiny pieces of metal.

How Deep Can Objects Be?

This is a difficult question to answer. In general, the maximum depth is around 20-30cm. A detectors maximum depth can vary depending on several factors though:

Additionally, some metal objects cause the conductivity of the surrounding soil to increase over time. This is called a halo.

What Can Detectors Be Used For? Metal detectors are used for a variety of purposes and come in many forms. Some of the most common include:

Sounds Fun, But Aren't They Expensive and Difficult to Use?

Metal detectors can look intimidating to the newcomer, but they don't need to be complicated - or even expensive. It's true that modern detectors are becoming increasingly advanced, but in many cases you can get started by only knowing the basics. Some of the best beginner detectors are relatively cheap, and allow you to hunt for artifacts, coins and other objects with a great chance of success.

If you're interested in picking up the hobby, click the button below for my list of the best metal detectors or check out my list of beginner detectors here. Be warned though - metal detecting can be addictive! 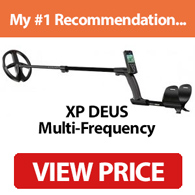 HuntingForMetal.com is a participant in the Amazon Services LLC Associates Program, an affiliate advertising program designed to provide a means for sites to earn advertising fees by advertising and linking to Amazon.com.

HuntingForMetal.com is also a member of other affiliate programs. When you click a link, we may receive a small commission for purchases.

While we make every effort to ensure all information is correct and up-to-date, HuntingForMetal.com makes no warranties, representations, or assurances as to the accuracy, completeness or currency of the content of this website. Click here to read our full disclaimer.